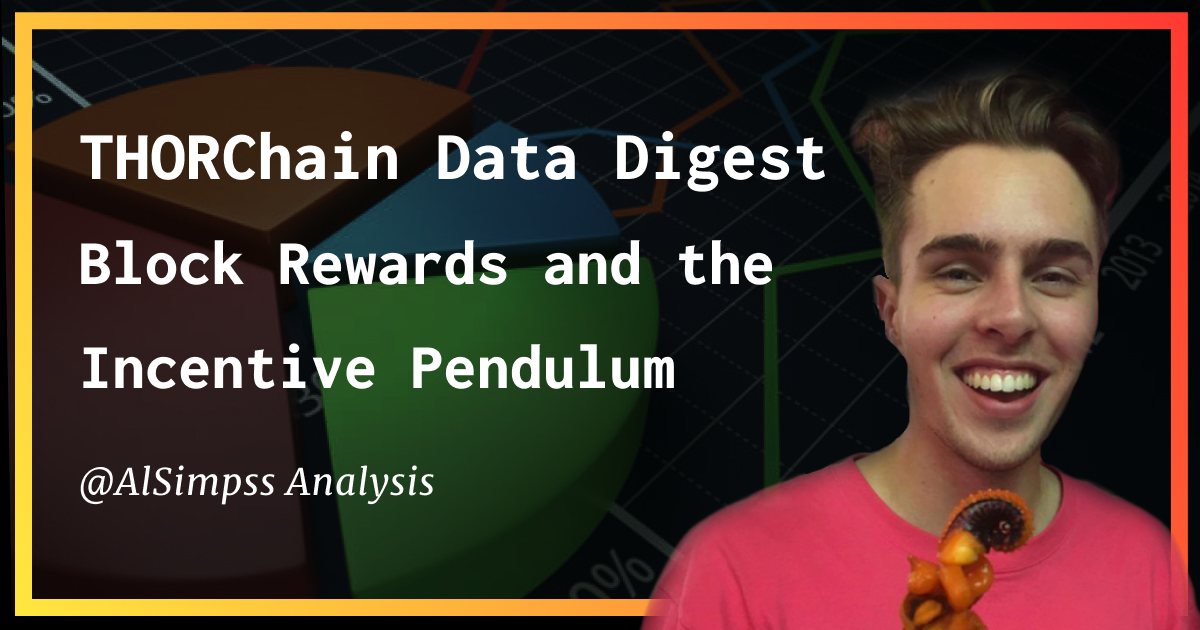 THORChain has a very competitive APY range when it comes to assets like Bitcoin and stablecoins like BUSD. Earning 30-40% annually on your pooled assets is nothing new in the THORChain ecosystem but did you know that block rewards actually make up 75% of the total income generated by LPs and Node operators?

According to research done by Alex Simpson, 721,145 Rune was paid out in Block Rewards from launch of MCCN until the first halt, while just 237,869 Rune was earned in fee revenues.

According to the same research, the Incentive Pendulum is also massively inflating rewards to LPs. Bond wars between Node Operators, coupled with limited caps raises to add liquidity, is consistently forcing THORChain into an inefficient (overbonded) state, boosting APYs to LPs.

THORChain started out with high block rewards with an idea to reduce them over time. Block rewards will slowly decrease by 1/6th each year over a period of 10 years. This approach, in theory, incentivizes early adoption of the platform.

This graph illustrates the difference between generated fees and block rewards.

Fee revenues have seen two large peaks, 45 and 74 days after launch of MCCN, which were caused by market crashes. Market crashes boost fee earnings as investors rush to stable coin pools to protect their portfolios.

User Growth: Current unique swappers on THORChain is 19,876. Extrapolating from this, THORChain would need to grow by 10,043 users to increase volume sufficiently.

These are no extraordinary expectations considering that Uniswap went from 24,963 users to 57,976 in July alone.

Block Rewards as a Cost to the Reserve

Impermanent loss protection (ILP) may seem costly to the THORChain reserve but numbers tell us a different story.

A detailed breakdown of ILP payouts can be found here:

If you take a closer look at every single pool, you will come to the conclusion that none of them is a liability at this point. It appears that fee revenues and ILP payouts are closely correlated.

It is more than clear that high APYs on THORChain aren’t coming from the trading volume itself but from block rewards and the Incentive Pendulum. Block rewards currently make up 75% of all system income and that will remain unchanged in the short to medium term. Moving forward, network volume and increased user numbers should take over as the main fee income stream.